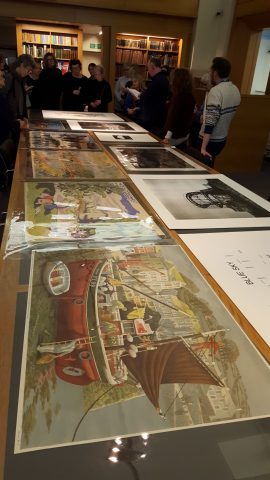 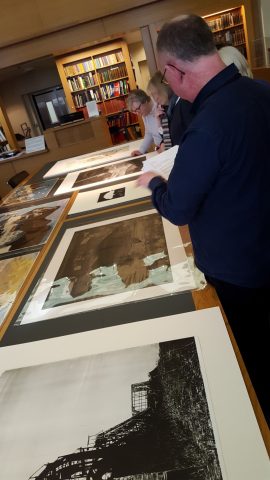 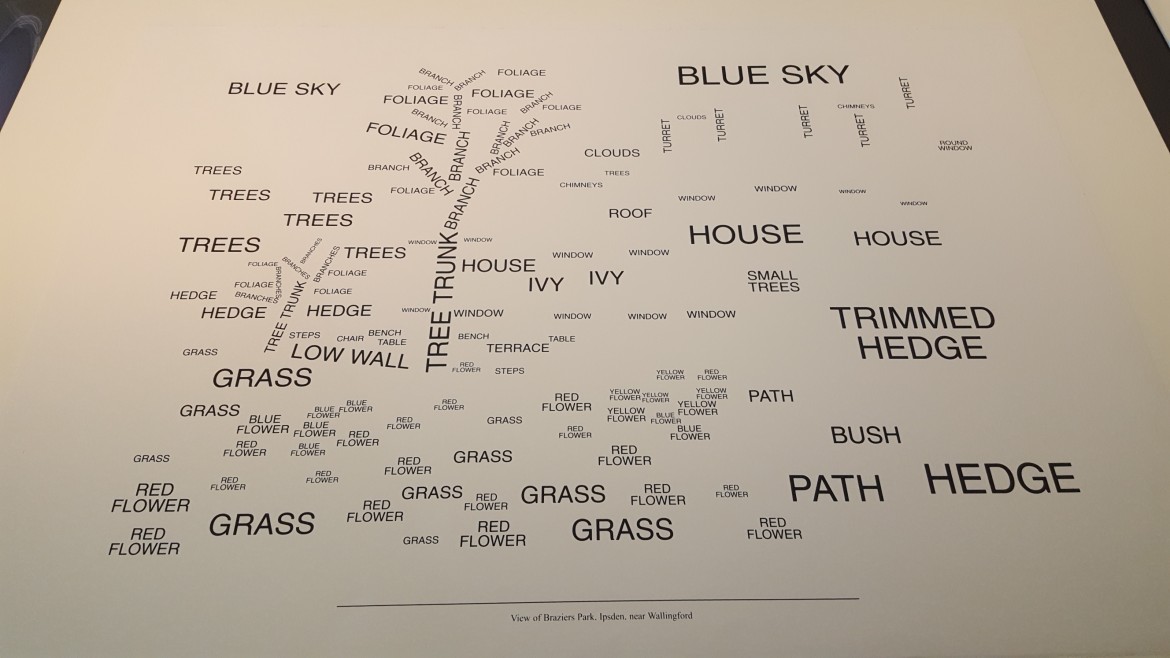 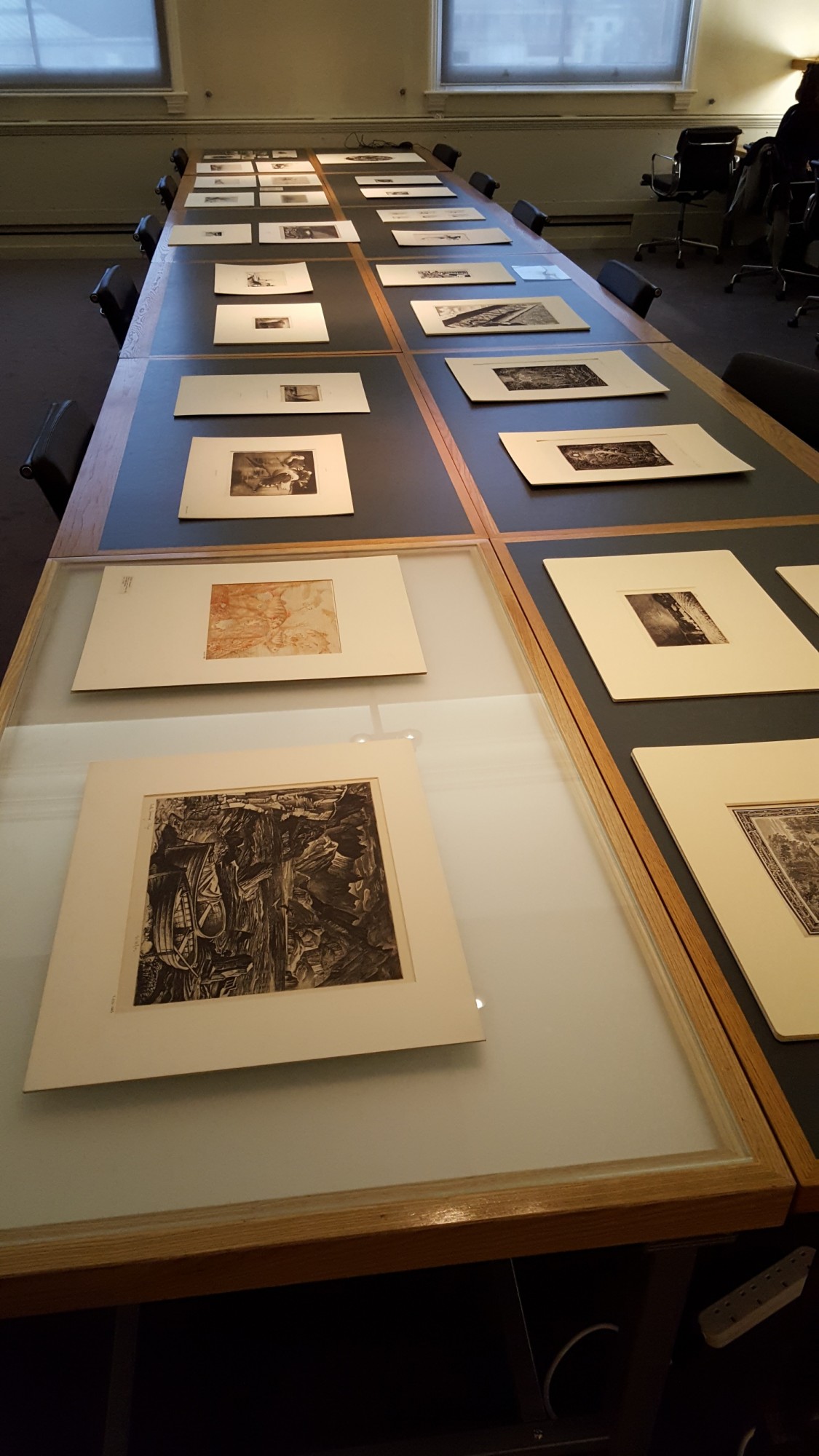 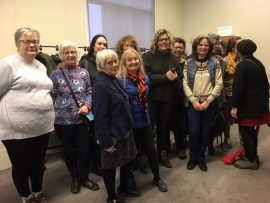 Intrepid members of the PMC braved arctic weather conditions on Monday 26th to explore a diverse set of prints chosen by curators from the V&A print room. The theme of the visit was ‘Land, Sea & Sky’ and curators had selected prints which reflected their own specialist interests. This resulted in our being introduced to International artists not often shown in the UK, as well as the chance to study national treasures such as Thomas Bewick – without have to peer through glass.

In the absence of Gill Saunders who had flu, the introductions were made by Tim Travers who pointed out that the V&A holds two millions prints including commercial prints and posters, so we were going to see a small selection. Tim’s specialism is in contemporary printmaking, particularly Russian, and the first piece we looked at was a large etching by an emigre artist Sergei Tsvetkov. The work concerned displacement while also referencing Solzhenitsyn’s novel ‘Gulag Archipelago.’

Amongst others, Tim showed us a print from Hockney’s ‘weather series’ called Lightning and several large coloured lithographs from the ‘Lyons Corner House’ print series. Made by artists including Anthony Gross and John Nash, they were commissioned after the second world war to decorate the cafes when house paint was unobtainable. They proved so popular that the series continued into the 1950’s and it was interesting to see the commercial work produced by fine artist printmakers.

Liz Miller, whose curatorial work at the V&A centres around medieval and early works on paper, showed us two hard ground etchings by Rembrandt. She pointed out that his landscapes always include a figure to show scale and that he is thought to have pioneered the hard-ground etching technique. Some of his prints are on Japanese paper and he also used Japanese gampi, a very thin, translucent paper used as chine colle to provide tone. The skies, meanwhile, are unetched and left clear.

She told us about the chance she had been given to select a copper block made by Rembrandt for the V&A. The choice involved not only aesthetics but also a forensic examination of the block to ensure that it had not been altered by editioning printmakers in the intervening 400 years.

Zorian Clayton is a specialist in ephemera and work from of the inter war years. One of his selection was a 1920’s wood engraving by Paul Nash called ‘The Sea Wall,’ a modernist reworking of the shore in Dymchurch. It was one of many intended for book illustration. We also saw an aerial work by his contemporary Richard Nevinson and a piece by Edward Wadsworth.

Katherine Martin is an expert in wood engraving and showed us a lot of delicate work that was wonderful to see without glass. The V&A not only holds work by Thomas Bewick of which we saw 2 examples, but also holds his tools and a collection of his blocks. We were also shown work by Ravillious and Robert Giddings who was influential in the revival of interest of wood engraving in the 1920’s and a huge wood engraving ‘Autumn Fruits’, by contemporary artist Gertrude Hermes.

The whole exhibition was a delight and many thanks should go to all the curators who provided the display as well as PMC members Angela Brookes and Jackie Baxter as organizers, and to Antoinette Momtahan who gave the vote of thanks.