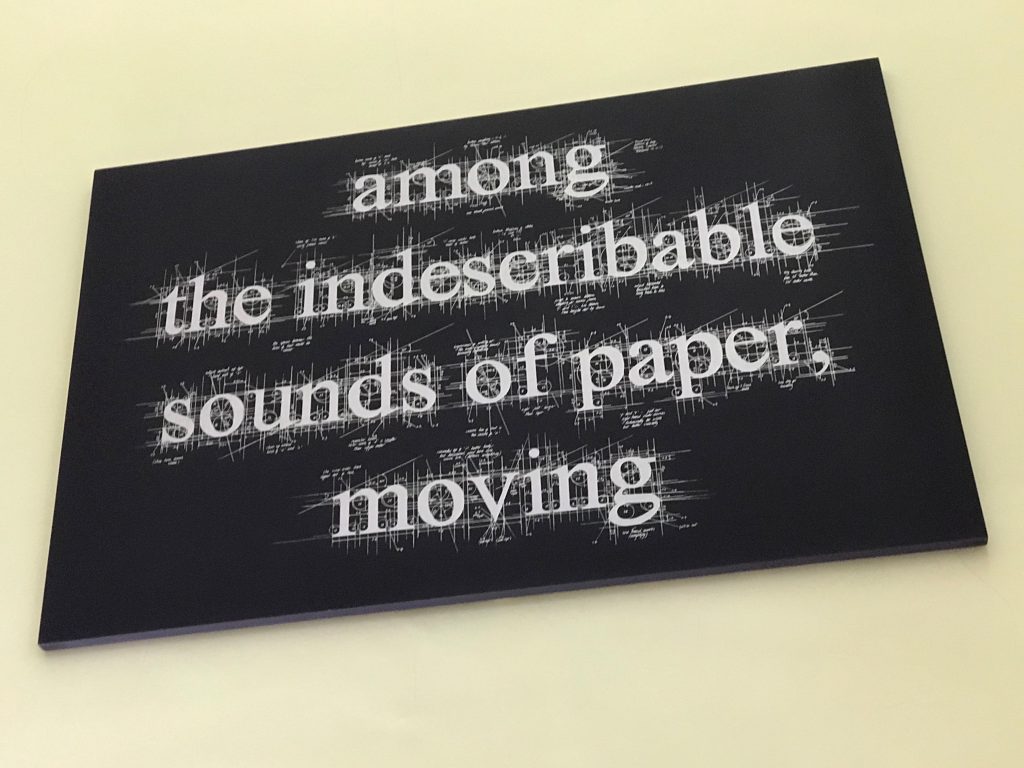 Members of The Printmakers Council were privileged to be offered the opportunity of a guided tour of examples from the Victoria and Albert Museum print collection in V&A Study Room lead by Head of Prints Gill Saunders and on this occasion ably supported by her curating colleague Tim Travis.

This 2018 visit is in response to the success of past V&A visits, and a unique opportunity to view prints selected from their archives. The print selection follows the recent PMC exhibition ‘Print City’, held at the Morley Gallery with selected prints related to cities and the urban environment.

The V&A collection of works on paper number over 1 million pieces of which about 500,000 are prints and the remainder drawings, watercolours and photographs. The V&A has been collecting contemporary prints for many years since its inception.

There is a slide show of our visit below. PMC Member Denise Wylie also captured the visit and has published on her facebook page . 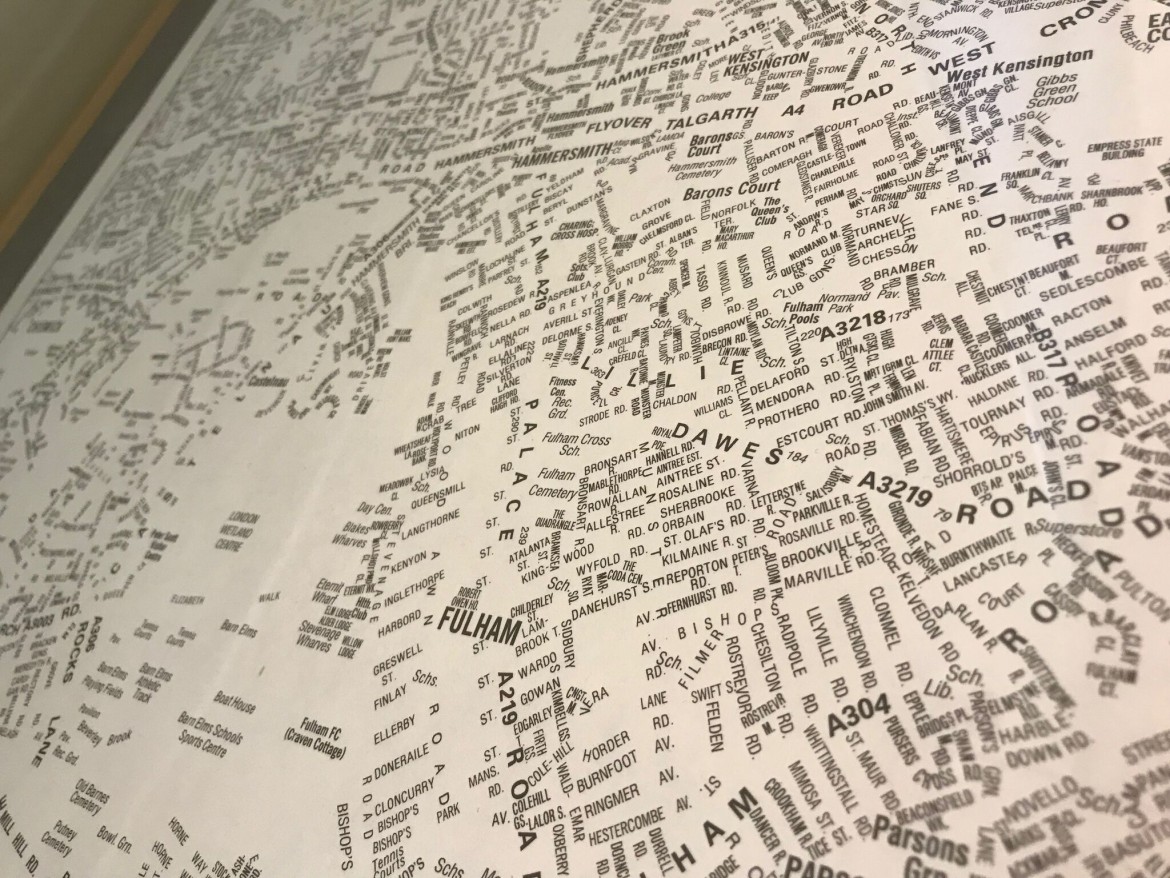 Gill began with typographical map of the city: London’s Kerning, which is a detailed street map with no delineating lines but each street is defined by its lettering. It was commissioned from NB: Studio (designer) by the International Society of Typographers in 2006

She then went on to highlight two prints by Chris Ofili made in Barcelona following his painting graduation show from the Royal college of Art where he met V&A curator Rosie Miles, who asked if he had made any prints.  He had not, however Rosie said that if he ever did let the Museum know.

Following graduation he saw some ancient rock drawings in Zimbawe made by artists in a trance like state.  He visited Barcelona and took himself into a similar trance and began drawing city landmarks on etching plates and produced 10 prints as a spiritual response to the city. These are two of them. Gill mentioned that attending degree shows was an opportunity to purchase works before they become too expensive!

Tim Travis took over to tell us about contemporary digital prints, including a monoprint by Russian artist Gluklya showing a monument to unknown workers, and a large-scale digital print by Tom Noonan.

Russian manhole cover stamps . He also introduced a unique Russian print featuring manhole covers included in a series of stamps titled ‘the best Sewerage for the best people’.  Each stamp has a subtitle dedication from the artists across the world that inspired the artist Alexander Kholopov while unable to travel out of Moscow. Images were shared across 70 countries via mail. An early example of mail art and a precursor to art and social media.

Gill showed us 4 of David Hockney’s series of 16 Rake’s Progress etchings, made while studying at the RCA when it was next door to the V&A. Guy Butters commented that Hockney prepared and printed his own plates and word has it that one of the reasons he took to print was that paper and materials were free at the time, unlike the expense of canvas and paints.  Gill suggested his prints may be even better than his paintings!

A surprising print was made on a plastic bag, part of a project to draw attention to the issue of homelessness in the city: Franko’s B’s A Bag for Life. Perhaps printed on throw away material, to chime with attitude much of society has to its homeless members.

We saw prints by WW1 war artist Joseph Pennell and prints of apocalyptic biblical scenes by 19th century painter John Martin.  Tim told us of the range of representation of the City by artists throughout the 19th century. Sometimes romantic, others reflecting anxiety about the spread of industrialisation and expanding metropolis, while other created images of cities of the imagination. In the 1980s Brodsky & Utkin were artists at the Moscow architecture institute. They worked so closely together they were awarded one diploma in their joint name. Moscow was supposed to be the ideal city and Stalin’s contribution/ legacy was the metro, whereas Khrushchev’s project was new housing which were all built on old historic sites. Tim commented that ‘houses die twice’. 1. When people leave them 2. when demolished. At the time Russian printmakers had to print when they could as materials were not freely available. Etching paper was not always available and multiple copper plates were made and printed later when paper became available. 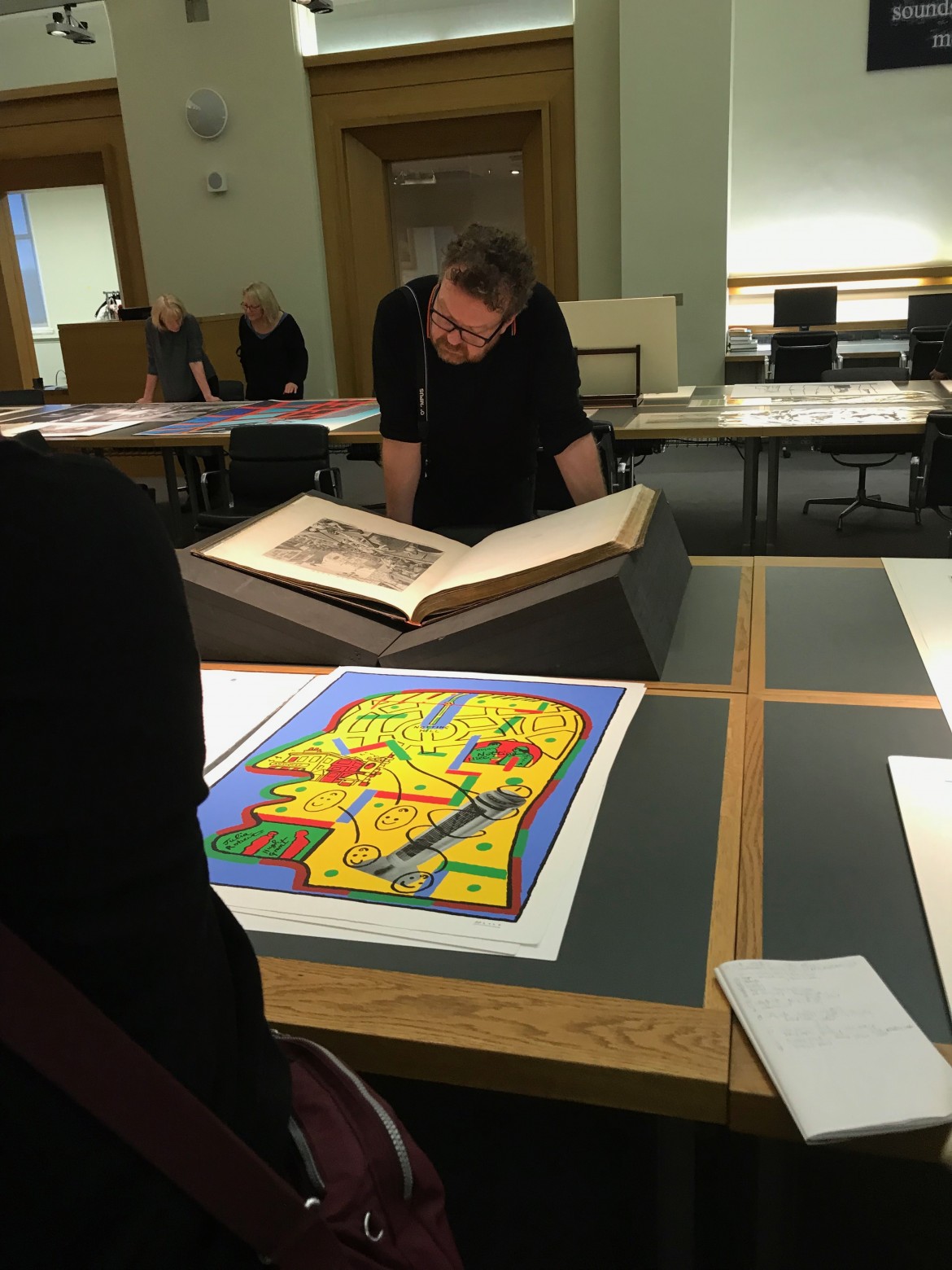 Gill took us through prints by Whistler of the Thames.  A wonderful Hogarth book of engravings showed urban settings including Beer Street and Gin Lane illustrating the effects of alcohol on less wealthy city dwellers. Also on show were Victorian views of upmarket society entertainment at Vauxhall Gardens and Robert Gibbings’ wood cuts of London bridges, as well as colour lino-cuts of city transport, workers and life in the 20’s and 30’s by artists of the Grosvenor School.

One from this group of prints was by the artist Leonard Potter.  He was a late-comer to print having worked in stained glass, but in the 1930’s turned to colour lino-cut. Gill remembers receiving a call from reception one afternoon a few years back:  “Mr David Potter to see you”. Not knowing a David Potter, she nevertheless less went to meet the unknown visitor and met an elderly gentleman holding a battered carrier bag. Mr Potter said “you might want these” and brought out 3 colour prints of “my father Leonard’s work. We thought you might like to have them.” A truly generous and truly wonderful gift.

Following on from lino cuts we were shown a stunning collection of Christopher Nevinson’s City scenes including a 1918 Futurist influenced semi-abstract mezzotint with rich, inky black velvet shadows.

Tim brought us up to date with a series of colour screen prints by 12 artists working with an Royal College of Art partnership to support the Notting Hill Housing Trust refurbishment in 2003 including a print of (local resident?) Justin de Villeneuve. 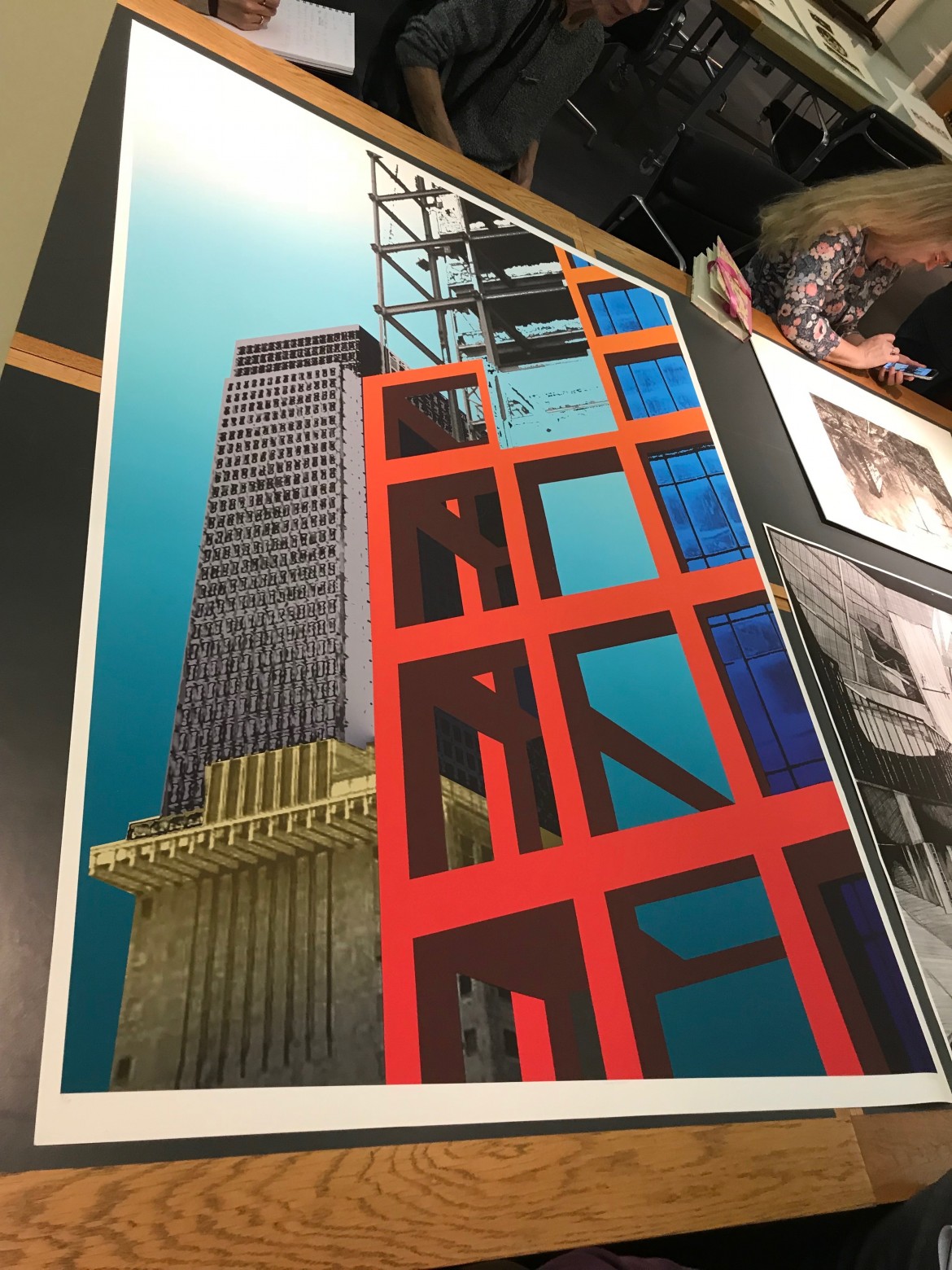 Gill concluded the expert and insightful tour by showing a collection of abstract prints responding to the city experience. As we reached the end of our tour of four extended tables of multi genre printmaking Gill and Tim took questions about the prints we had seen and the city concept that had inspired their selections.

We were encouraged to spend more time up close with any of the prints with a generous period of free time in the room which members enthusiastically took up. Gill also pointed out the print by Liz Collini specially commissioned for the Print Room with its text: “Among the indescribable sounds of paper, moving.”

Do look at PMC Member Denise Wylie’s excellent review of the visit on her facebook page .

The Print Room is a study room where original prints can be viewed, after looking at the online catalogue and booking in advance. Gill and Tim encouraged PMC Members to make appointments and visit to see the most wonderful and wide ranging collection of extraordinary printmaking.

All the prints can be viewed on the V&A collection site: https://collections.vam.ac.uk/ 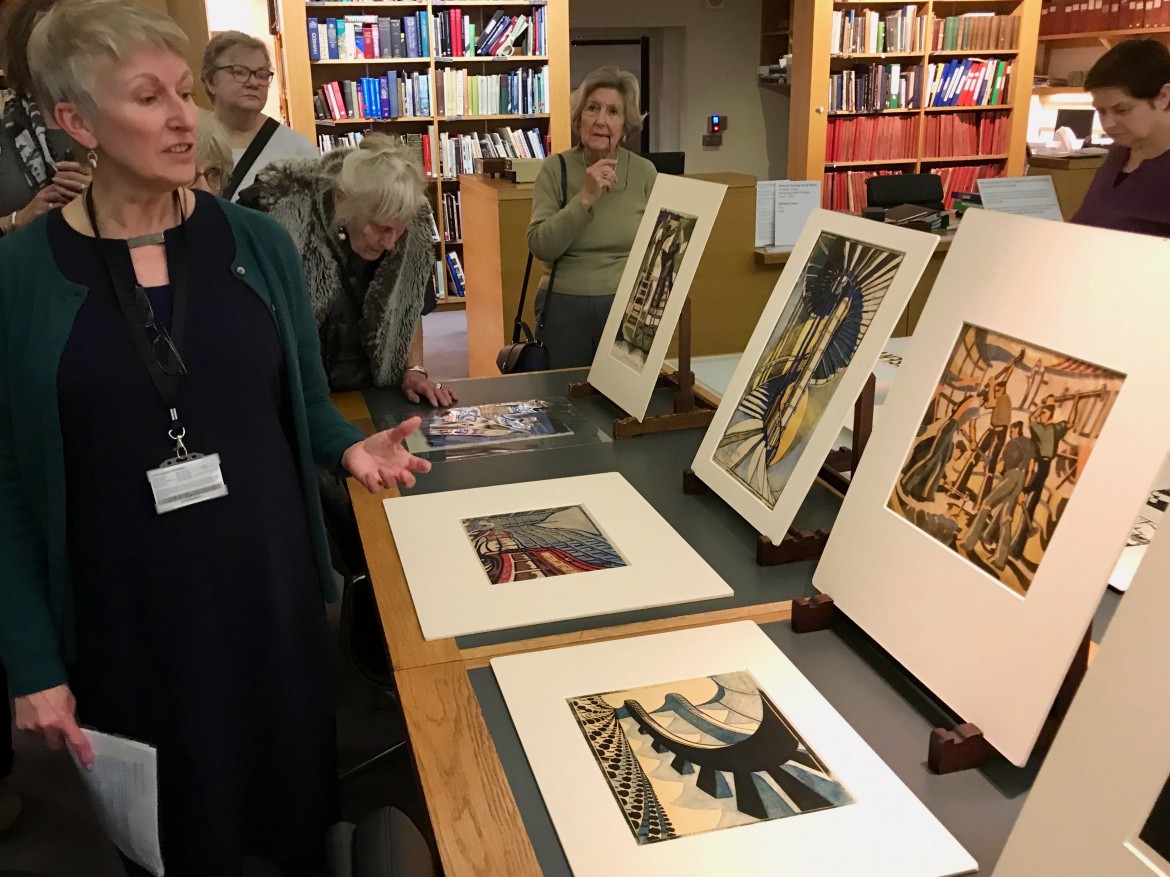 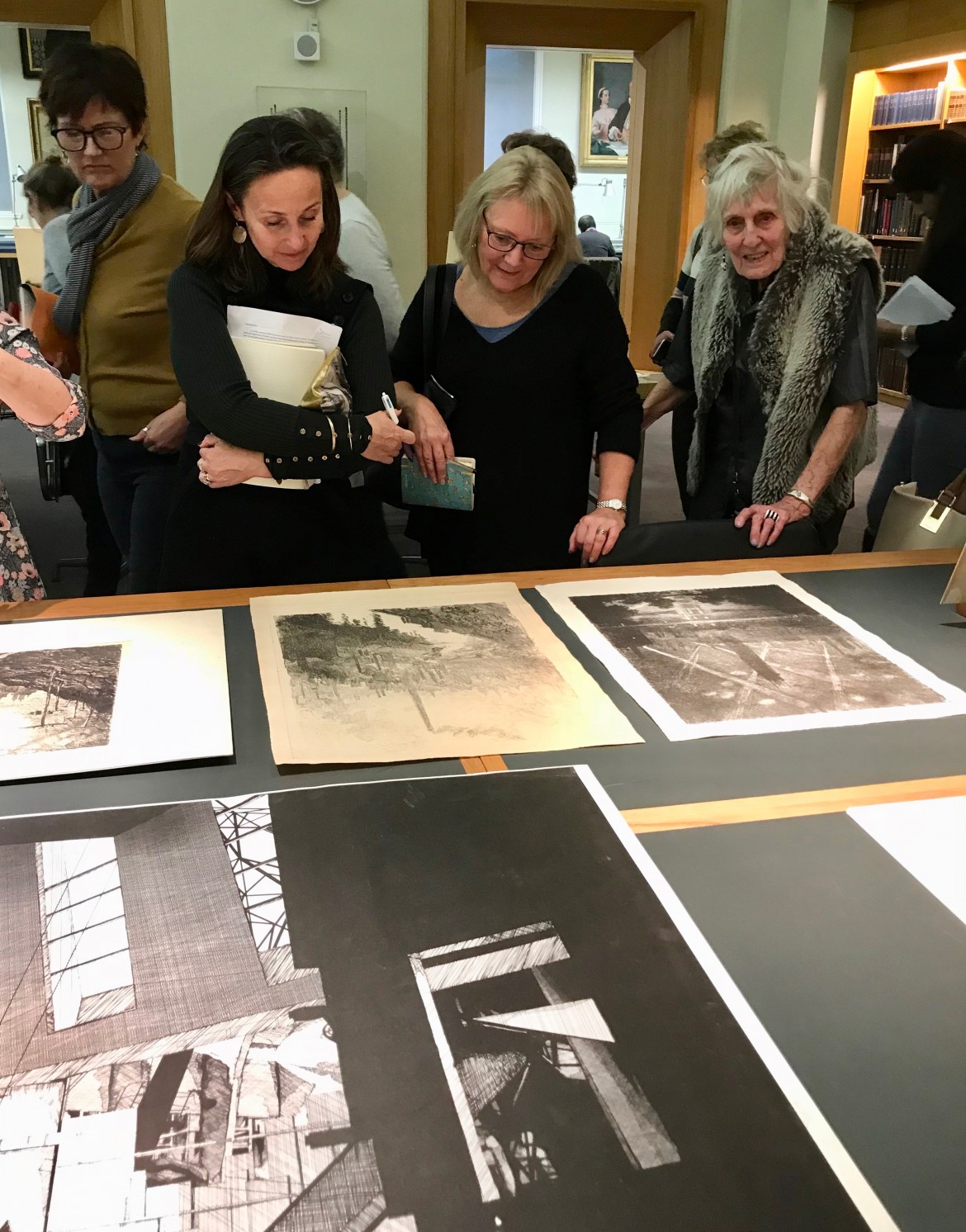