As an interdisciplinary art practitioner, for me, the allure of  printmaking lies in the potential that the process offers in enabling me to use different methods and materials to generate multiple permutations from a given set of substrates. Perhaps working as a doctor and scientist, pushes me into considering the endless possibilities of combining different techniques to arrive at a ‘finished’ product or result.  I like to re-sequence the plates, change the alignment, and even use the back of the plates to make new variations. In some instances plates from different projects have been combined to produce new hybrid works. In retrospect, some of the projects that appear to have parallel pathways, have had a similar trajectory and the convergence becomes a natural organic process.

In 2003 I chose to do a Masters Degree in Book Arts, at Camberwell College, University of the Arts, London – encouraged by my passion for books and publishing history in medical & scientific journals & texbook. One of the earliest artist books I made at Camberwell was a humble ‘blank’ book titled: Outside In [OI] 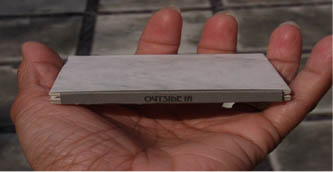 A seemingly simple object, in keeping with the popular minimal conceptual art made in the UK at the time, it offered glimpses and hinted at another narrative to be explored within the hidden spaces of the book. The detachable spine allowed the book to be ‘undressed’ to reveal on the reverse of the pages a boustrophedon reading of a more elaborate stitched felted book. The pages bore stitched cross sections of our body, on layers of other animal ‘coverings’ (wool, leather, etc). The pages were felted, using animal (sheep’s wool) and plant fibres (cotton, linen, flax etc). The book was a nod to various non-human animal prosthetics being developed and also to the issue of genetically modified foods, that were causing a great deal of consternation among the conservative recipients at the time as their commercial availability grew. The stitched pages were in turn converted into another bookform (an etching, aquatint and embossed version) held within glazed and fired ceramic covers. 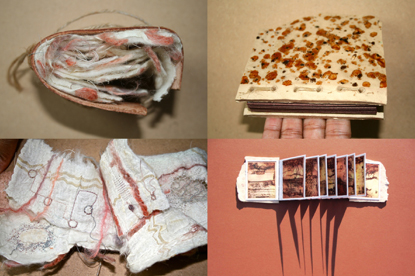 Earlier this year, this work was revisited and extended to form large site-specific installations titled IO-OI [Inside Out–Outside In] designed for the Museum in the Park, for an exhibition titled the POWER OF TEN for the Stroud International Textile Festival. This venue had a newly built pavilion and garden for which my installation referenced 10 other temporary pavilions commissioned and built outside the Serpentine gallery. These ‘footprints’ were merged with my house plans and routes to the venue. 2D prints were folded into 3D modules, constructed without glue or stitch, and held together by folds and tucks. This ‘flat pack’ design was devised to echo the transient nature of temporary shelters.

More variations on the theme of IO-OI, were developed for other site-specific exhibitions: PRESSING IDENTITIES at the West Yorkshire Print Workshop, LOOP 2015 at Bankside Gallery, and ELP Annual at the Tea Embassy Gallery, adding on the surrounding road maps and the internal gallery plans, with extensions reaching out from the prints as drawn lines traversing the floor, wall and all along the ceiling.  For the PmC 50th Anniversary Exhibition: IO-OI [PmC@50] series: was a tribute to the PmC archives over the past 50 years, an installation designed to hang down from a wooden plan chest placed high out of reach. The PmC was founded in 1965 by storing a few prints within a plan chest housed in a member’s basement. Since then most of the archive was inaccessible to the public till now.

Another series of IO-OI has been despatched to New Zealand and will be shown as part of the 4th Biennial International Open Print Show at the Wharepuke Print Studio and extended lines will be drawn to reflect this excursion. Next year another series will be installed at the Art Pavilion, at Mile End for an exhibition titled: A New Home. The latest version of this series has been constructed and programmed to produce sounds when approaching or touching the prints using electro-conductive inks, to add another dimension to this work.

I have produced work of larger dimensions, using connecting modules for the series: MIND THE GAP, first shown at LOOP 2007 at Bankside Gallery. The installation occupied 50 metres in total length by looping prints that ran through the glass cabinets, up along the wall to the ceiling, and down through perspex boxes to trail onto the floor. The origin was an artist book made to the exact size of a pocket tube map when closed. The series focused on gaps and cracks on the underground stations. This series was revisited in 2013 to include more gaps and cracks within the Shoreditch Townhall Basement  for an exhibition titled; GOING UNDERGROUND 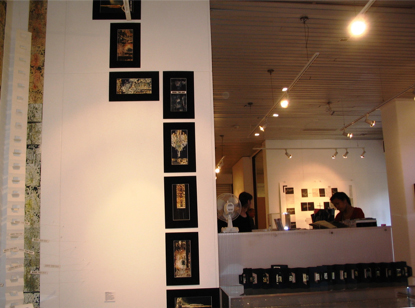 Much of my work is a discourse about the space occupied within and around the body. I had many geographic transpositions enforced by my family since the age of three, living between Sri Lanka, England and Scotland to further their education. This nomadic wandering has imposed a multicultural element to my work that attempts to blur boundaries between the occident and the orient. My early work examined how we enclosed our bodies with garments, what parts were concealed or revealed: To Bare or Not To Bare (on topless garments, made to commemorate 40 years of British Naturism in 2004) compared issues of modestly between different cultures. Against the Grain was about men in dress. Other variations: Clothes Encounters of the Third Kind (and its multiple variants) explored machinations within the garment industry; Cast Offs was about stretchable knitted garment using abandoned cast off strips of metal; 10 to 20-Sizing Up the Opposition (about ready-made dress sizes dictating our body shapes and dimensions) etc. The latter work was an animation produced in 2004, and another variation of this work was hung as an outdoor installation at Pinkwood, Somerset in 2014.

TOP 10 WCC [Top Ten White Collar Crime] was designed for a project called LISTS etc. for the International Contemporary Artists’ Book Fair, Leeds, and later shown at the London Art Book Fair, Whitechapel Gallery London in 2014. Ten printed collars (mezzotint & digital) and lists of ten white-collar criminals (WCC), ten prosecutors, and ten cinematic (fictional/non-fictional) criminals were provided as ‘tags’ to cut up and re-insert. It is an interactive work instructing the reader to speculate on different outcomes in alternative circumstances by re-sequencing the criminals, their sentences and prosecutors. Subsequently this work was modified for the exhibition; POWER OF TEN  (Stroud International Textile Festival) incorporating ten vintage clip-on collars with stitched phrases of criminal acts with textile references: ‘lining your pocket’, ‘fringe benefits’, ‘hand in glove’ etc .

In 2007 following a visit to Frieze and seeing very few prints or drawings, I started on a series dedicated to works on paper. Around this time I was designing a book for an exhibition titled SHELTER in Boston. Building Blocks, is an exploration on architecture in which  I used a laser beam and stitch as my drawing tools. It is an on going series and has toured many different countries. An entire room at Dreamspace, London was decorated with Building Blocks Wallpaper, for the exhibition titled: Off The Wall, and featured interactive pleated prints that used dust instead of ink, that cascaded away from the wall. Other extensions of this work: Rebuilding the Unbuilt was a dedication to paper architects, The Negative Space of Architecture, Think Outside the Building Blocks are works in progress on the same theme. Frequently my work is left ‘open’ with an invitation for the editorial control to be reversed. 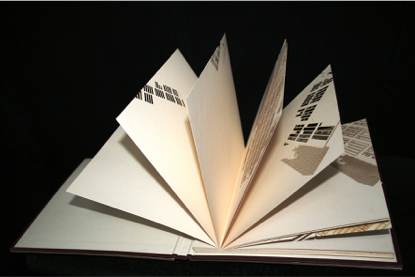 Many collaborative projects have been running since 2006, where I offer my prints to others to intervene with: Perceptions made for the Helen Keller International Award, Carbon Footprint for CarbonArt  the City Hall, London, Work in Progress (a tribute to James Joyce’s Finnegans Wake) and Unbuilding Blocks. All these projects will be showcased at the Centre for Print Research, University of West England, Bristol in 2016. 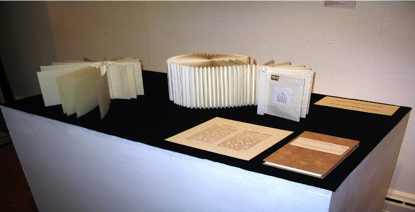 10. Series of SSAEs still in circulation.

11. Global database of footprints-work in progress

13. 1st shown at Sketch 2013, UK; at Standout Prints, Highpoint Centre for Printmaking, Minneapolis 2014; Art in a Box 2014; LOOP 2015; and ELP Annual Exhibition where it was awarded the Laurence King Publishers Prize.

See more of Sumi’s work on her artists page here