Aquatint: A means of producing tone, like watercolour, as an addition or an alternative to line in an etching. The plate is covered with melted grains of resin and then put into acid, which bites into the metal around each grain, leaving white dots when printed. Stop-out varnish is used to protect areas during second and third bites to achieve a range of tonal variations. The longer the plate is in the acid the darker the tone will be. 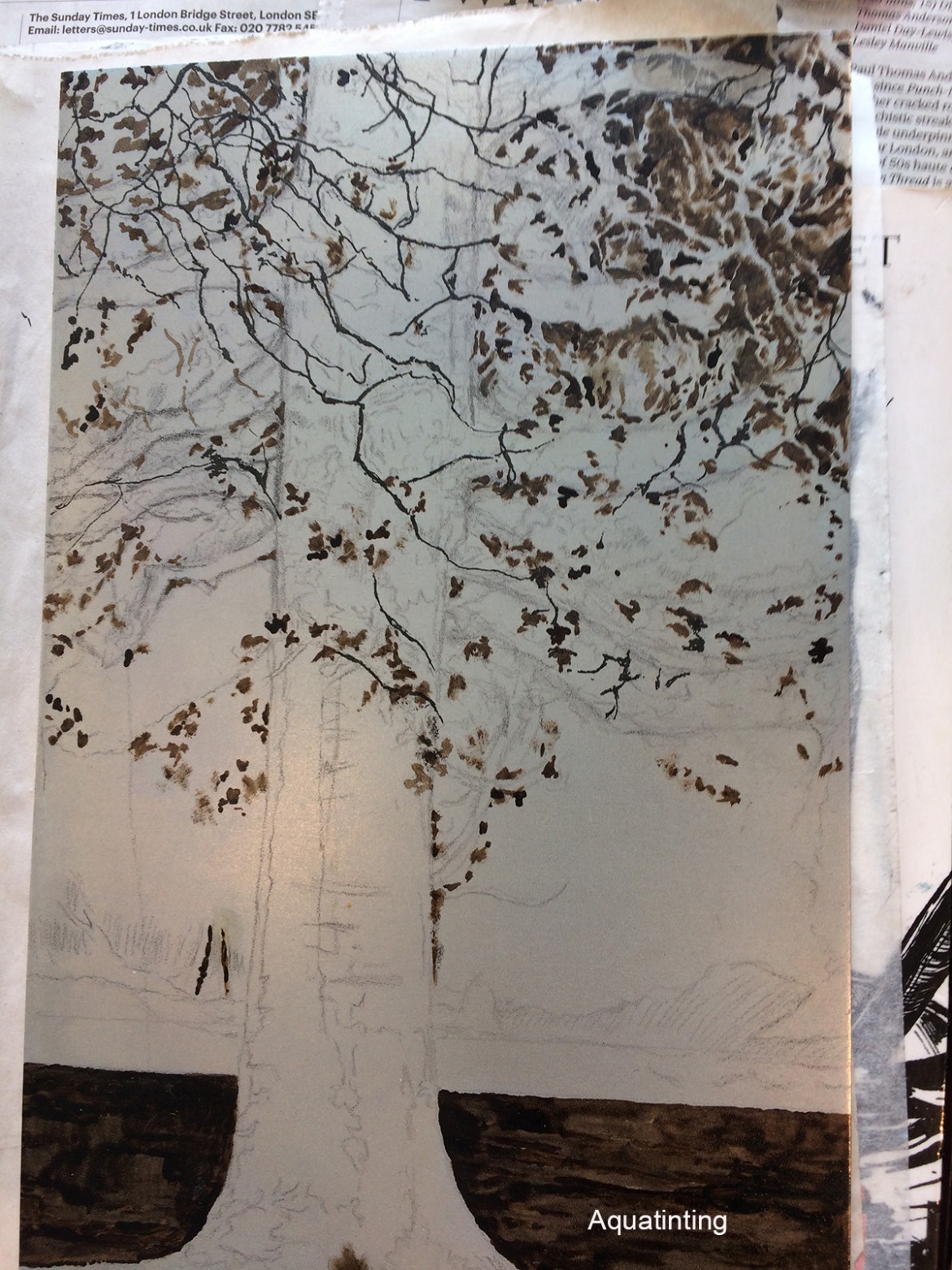 Artist’s proof (A/P): A small number of prints alongside the numbered edition for the artist’s private use. Numbered separately from the main edition e.g. A/P 1 (see Edition below)

Carborundum:  Powdered stone that can be stuck to an intaglio plate with glue or epoxy resin, creating a sandpaper texture on those parts of the plate where the adhesive was applied. It prints to a rich black.

Chine collé: The addition to a print of another piece of, usually coloured, paper inserted between the plate and printing paper when it goes through the press. It is both collaged on and printed over at the same time. 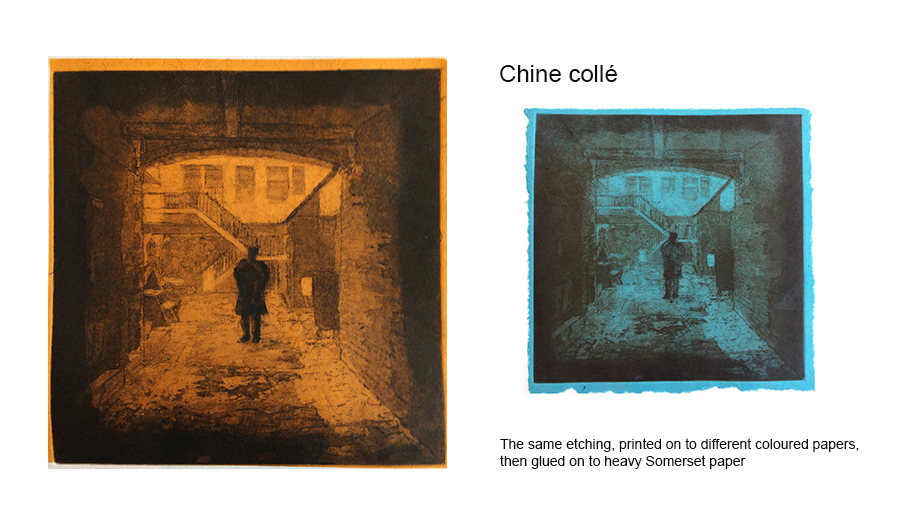 Collagraph: A print from a plate made with glue, card, or other materials to form a raised surface. A collagraph may be printed in relief or intaglio.

Cyanotype is a photographic printing process that produces a cyan-blue print. The process is very similar to Photogram (see below).

Drypoint: Lines are scratched directly into the plastic or metal plate with a sharp needle, without the use of acid. These lines throw up a burr of metal on either side which, when inked and printed, produce a rich, velvety quality. 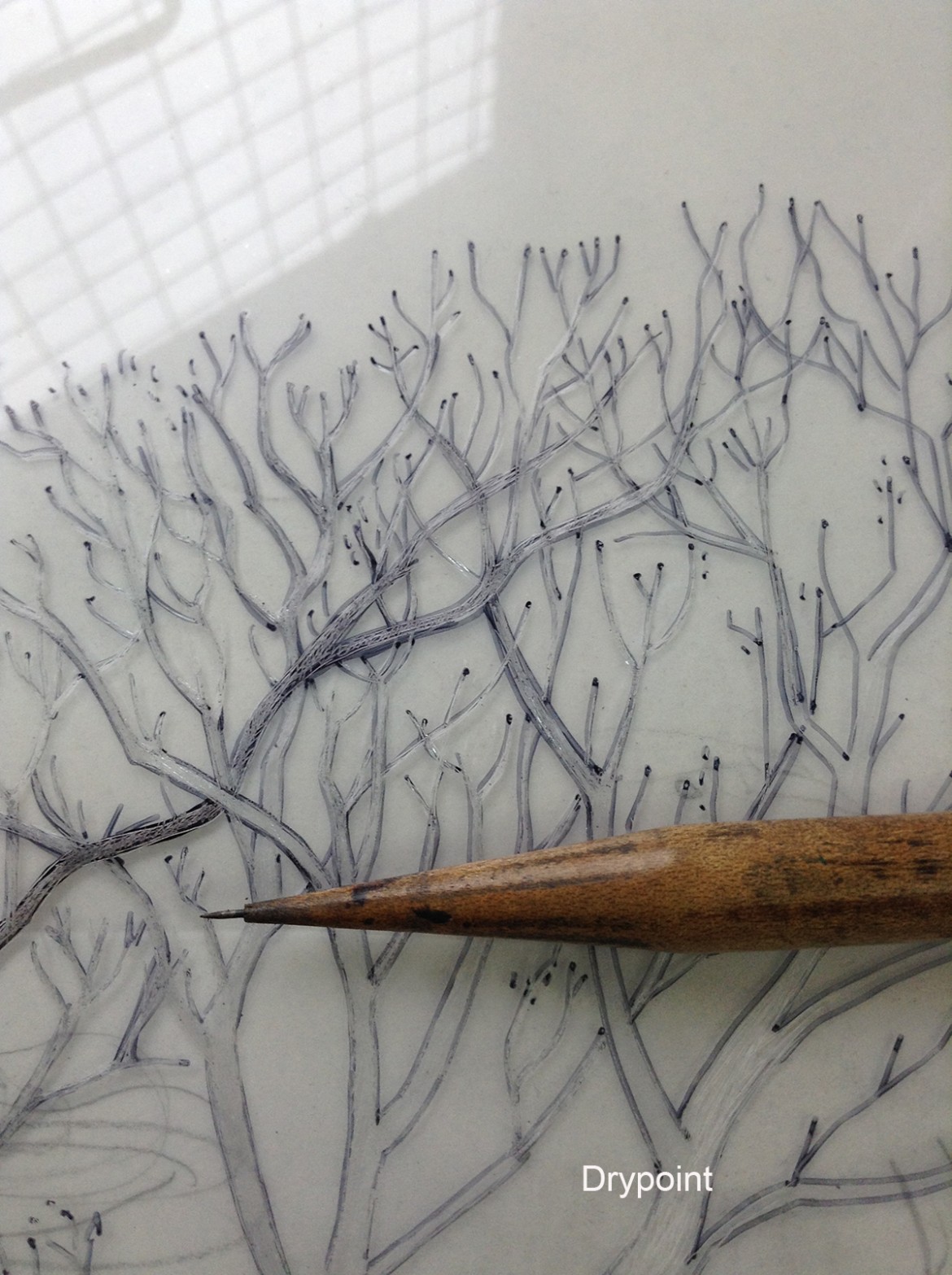 Digital prints: Original artwork and other source material (e.g. photographs) combined and manipulated using digital technology, to create a new image. This new original image can be laser or inkjet printed onto paper or canvas.

Edition: A limited number of identical prints, usually numbered and signed by the artist in pencil. The number and edition size are normally written as a fraction on the print, e.g. 2/10 is the second print in an edition of 10.

Embossing: A design impressed into damp paper from an un-inked card or metal plate.

Engraving: Lines are incised into a highly polished metal plate with a very sharp-pointed tool, diamond shaped in cross-section, called a burin or graver.  The tool works rather like a plough cutting a furrow.  The strength of the line may be increased by cutting deeper. The burin is held in a fixed position and, to produce a curved line, the plate itself is turned.  This makes engraving a slow and painstaking process which produces controlled, formal results.

Etching: An intaglio process in which the image is etched into the plate with acid. A layer of wax ground is applied to protect the plate through which lines can be drawn with a needle.  Different depths of line, which print stronger tone, are achieved by coating some of the lines with stop-out varnish and biting others a second or third time in the acid.  Broad areas of tone are produced by applying resin (see Aquatint above). There are also photo sensitive resists for making photo etchings. 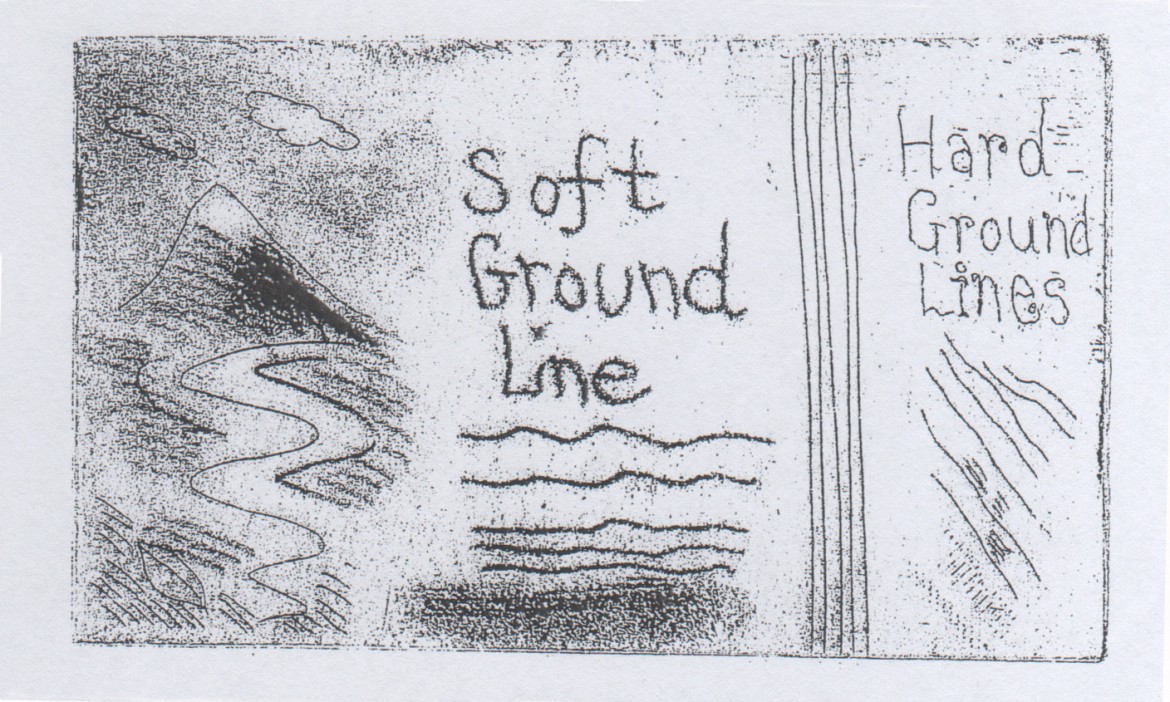 Giclée: A high quality, digital photographic ink-jet process.  A somewhat contentious process, largely because it is often used to reproduce existing works of art and the giclée prints offered for sale as original artist prints, which they are not. There is however no reason why giclée printing should not be used in combination with more creative processes.

Intaglio: Any process where the printing ink is retained in the lower scratched or otherwise eroded areas of the plate and printed under great pressure on an etching press. To print, ink is applied to the whole plate and polished off the top surface. The inked plate is covered with damp printing paper and then with soft blankets that ensure the paper is pressed into the inked lines.

Linocut: A relief process where the negative areas are cut away from a piece of lino in much the same way as for Woodcut. Lino is smoother and easier to cut than wood, and can produce flat, even areas of colour when printed. Instead of cutting the lino may be etched with caustic solution. Either way the ink is rolled onto the surface and the block is printed on a flat press, or the back of the printing paper can be rubbed to take an impression. 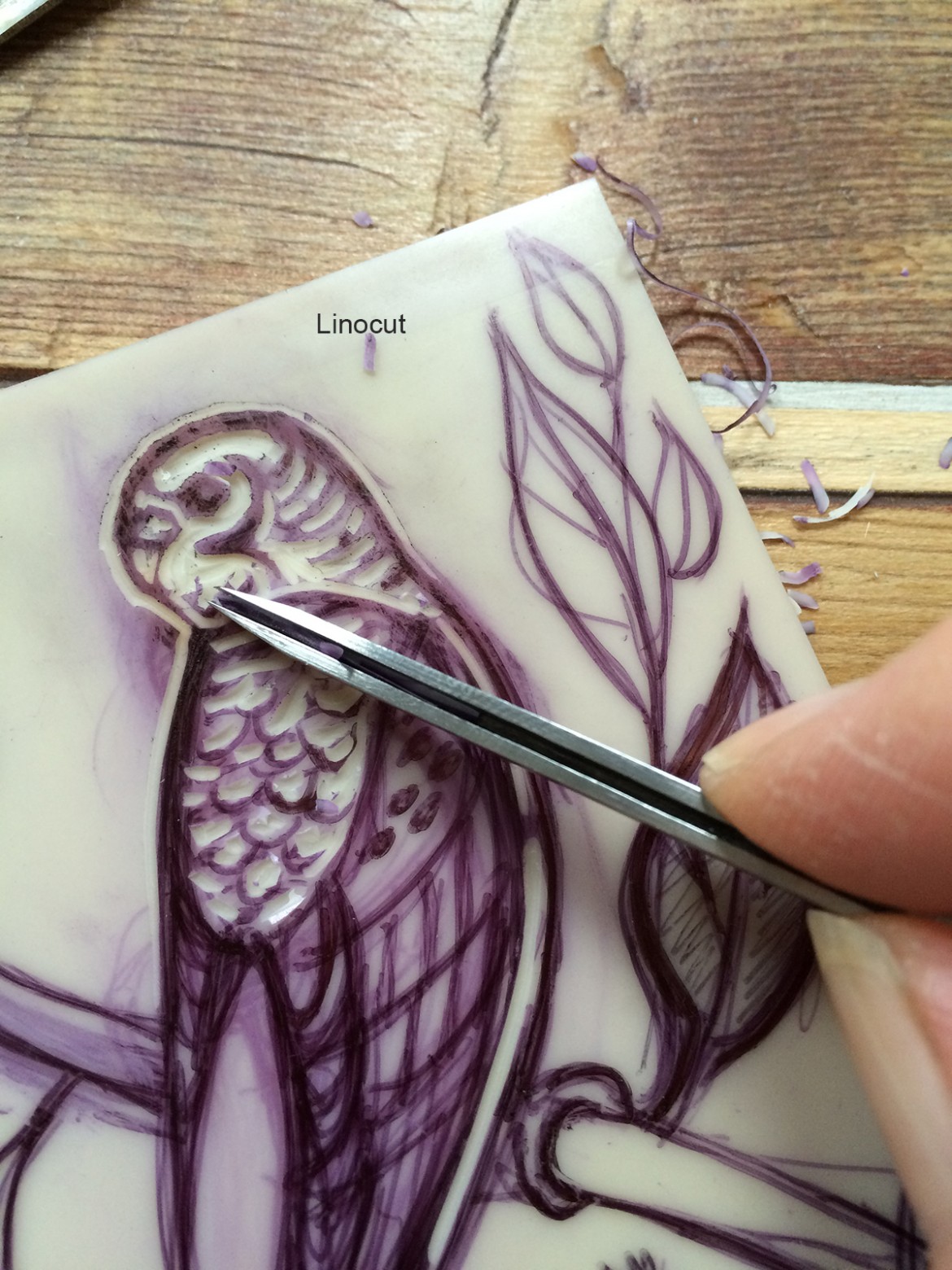 Lithography: The process of lithography depends on the fact that water and grease repel one another. The image is drawn with a greasy ink or crayon on a stone or plate leaving the background retentive to water. The term literally means ‘stone drawing’, although metal or plastic plates are now often used instead of flat stones. The ink is transferred to the paper via a press, either with the paper directly against the plate or in offset lithography onto a roller first, which allows the image to print how it appears on the plate. Photolithography plates are also available.

Mezzotint: A process which works from dark to light tones by scraping down or burnishing a roughened metal plate. The plate is systematically roughened into a mass of close-cut regular indentations using a serrated steel rocker.  Working from dark to light the plate is systematically scraped and burnished to produce a design conceived in a series of tones rather than lines.  The more scraping and burnishing done, the lighter the tone. 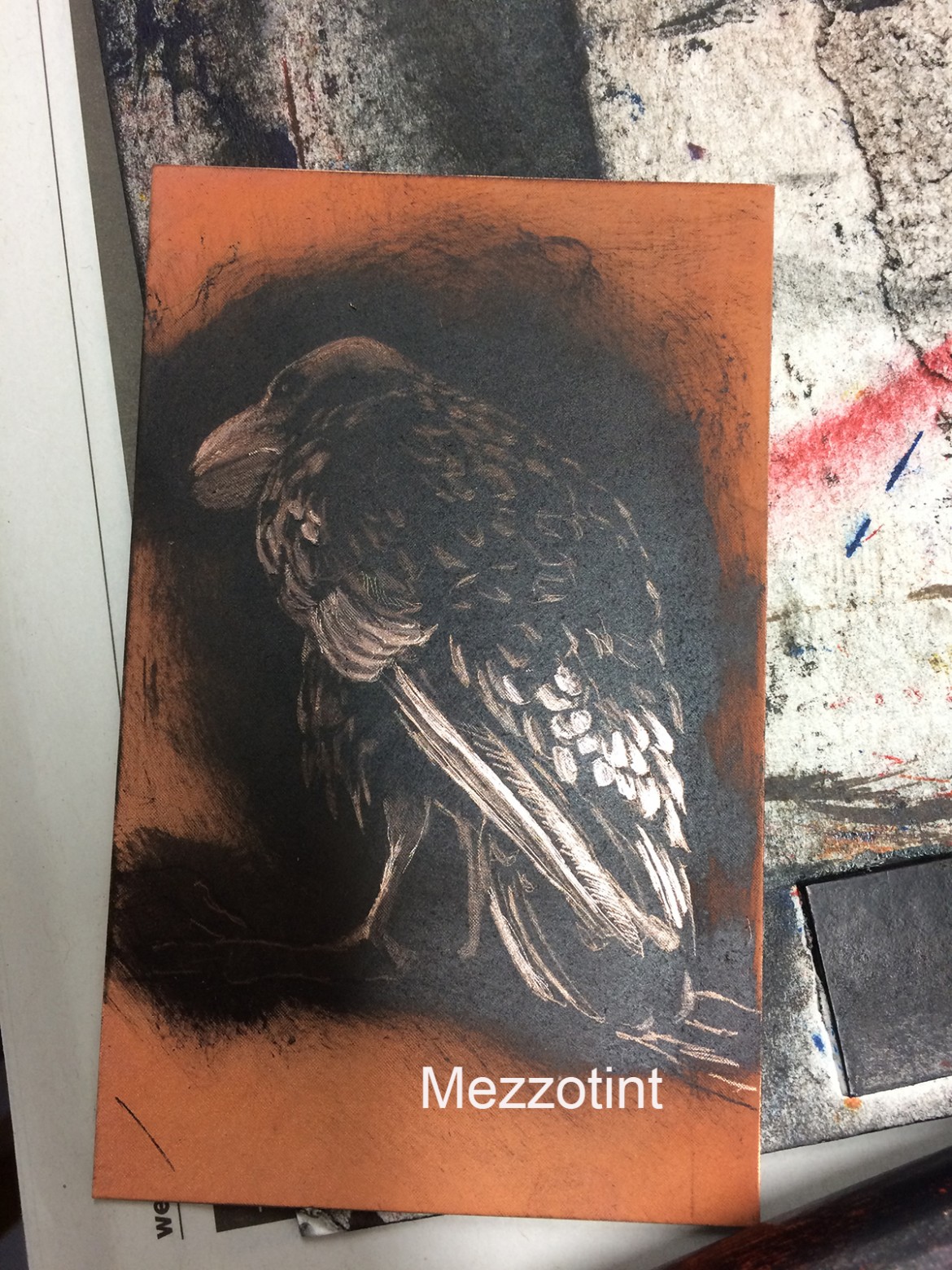 Mokiluto: A type of lithography using wood block (plank) instead of a stone, metal, or plastic plate.  The wood block can also be carved allowing for a combination woodcut and lithographic print.

Monoprint: This refers to a single, unique print. Monoprints can be produced using any printing technique.

Monotype: A design is drawn on any smooth surface with printing ink or paint.  While the ink or paint is still wet, a piece of paper is laid on top of it and pressure applied, either by hand or with a press.  The process, as its name suggests, is designed to produce a single, unique, impression, but there is sometimes enough ink or paint remaining on the plate to produce a second, weaker proof.  Monotypes are also made by lightly inking the whole of the plate, laying a sheet of clean paper over it, and then drawing on the back of the sheet, without applying any pressure other than that exerted by the point of the pencil or other drawing tool. 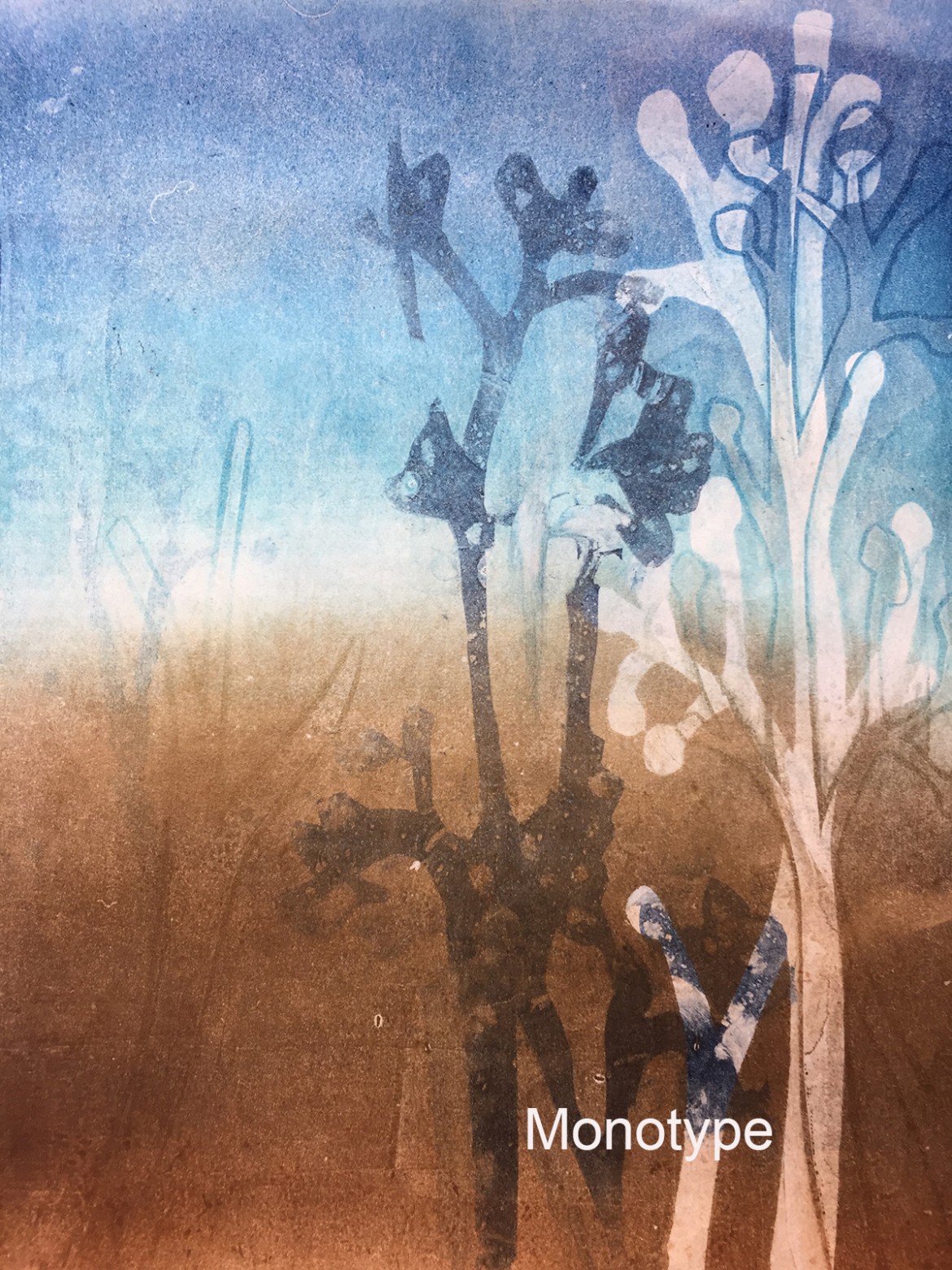 Original print: A print designed by the artist as a print, not simply a printed reproduction of a painting or drawing, signed and numbered as a limited edition or monoprint, and printed either by the artist or by professional printers under the direct supervision of the artist.  To be considered an original print the artist must have created the image on a block, stone, plate, screen, or other material from which the final print has been produced.

Photogram: An image produced by putting objects directly onto a photo-sensitive surface and exposing them to light, rather than using a photographic negative.

Photopolymer and solar plates: thin metal plates with a layer of light sensitive photopolymer on them. A film positive, photographic or hand drawn, is exposed onto the plate, and then the photopolymer is washed away, creating an indented plate that is usually printed in intaglio on an etching press. The surface can also be inked and printed in relief.

Relief: Any printmaking process in which it is the surface standing in relief above the rest of the block that is inked. Colour is normally added using separate blocks. Alternatively, the original block can be successively cut away each time and printed again. This is described as a reduction print.

Risograph: The Risograph machine is a stencil duplicator, and is a cross between screen printing and photocopying. The machine prints one color at a time in bright, vibrant colors using a rice oil-based ink that does not contain a drying agent. As a result, the ink never fully dries and prints are liable to smudging even after drying and thus may need to be fixed.

Screenprint: A stencil process in which the stencil is carried on a fine mesh (originally silk) screen. The ink is pushed through the mesh to the paper beneath with a flat but slightly flexible squeegee blade.  Multi-coloured images require many screens and the image must be carefully registered throughout the printing process. Stencils can vary from simple paper cut-outs, to hand painting varnish or other suitable filler directly onto the screen, or to photographic, digitally separated, full colour images. 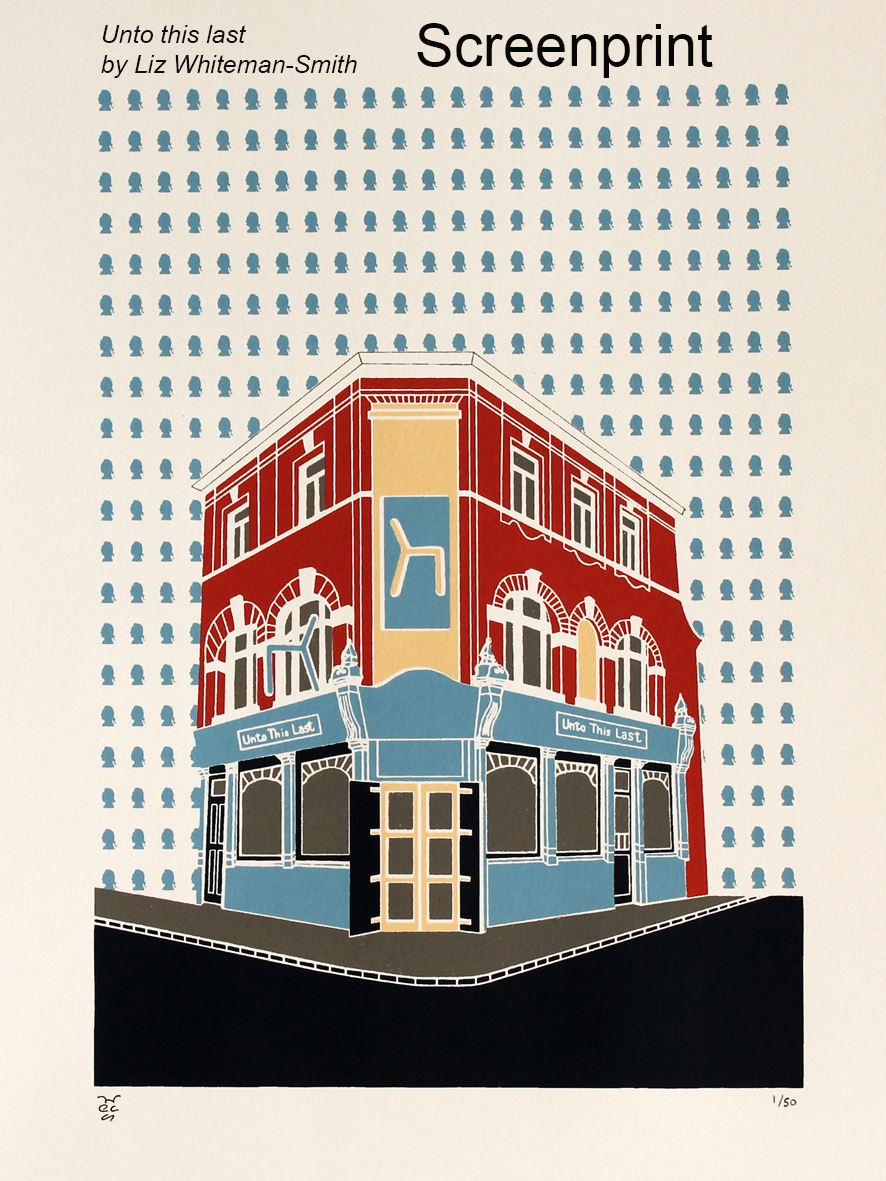 Solar Plate Etching: An intaglio process, also called photogravure or photo etching.  A plate coated with a light sensitive emulsion is exposed to the sun, or placed in a UV light box, with the artist’s image printed or drawn on acetate placed on top of it.  Areas where the light does not penetrate become the etched line after the plate has been developed.  The plate is inked and printed in the same manner as an etching plate.

Soft Ground Etching: An etching process used to simulate the effects of chalk or crayon drawing. A soft wax ground is applied to the plate.  A sheet of thin paper is laid over it, and a drawing made using a hard pencil or crayon.  Pieces of wax ground adhere to the back of the drawing paper where the pencil or crayon has left indentations in it, thereby creating an impression of the drawn marks.  The paper is carefully removed and the plate bitten with acid.  It is also possible to produce any kind of impressed texture with this method using leaves, textiles, or similar.

Stencil (Fr. Pochoir): Arguably the simplest and most ancient of all print processes. Negative spaces are cut into suitably thin card, acetate, or purpose-made oiled stencil paper.  Colour is then pushed through the cut spaces onto the printing paper below using a roller, brush or other implement, or sprayed on using an aerosol or manual diffuser.

Sugar Lift: Usually combined with aquatint, sugar lift is a way of incorporating painterly marks into the etching process.  A solution of sugar and black drawing ink is used to create an image on the metal plate. Once dry, the plate is then coated with a layer of quick drying stop-out varnish, and when this has dried the plate is washed in warm water to remove the sugar solution, revealing the bare metal. An aquatint is applied, and the plate bitten in the usual way. Using sugar lift it is possible to achieve very sensitive, gradated ‘washes’ of tone. 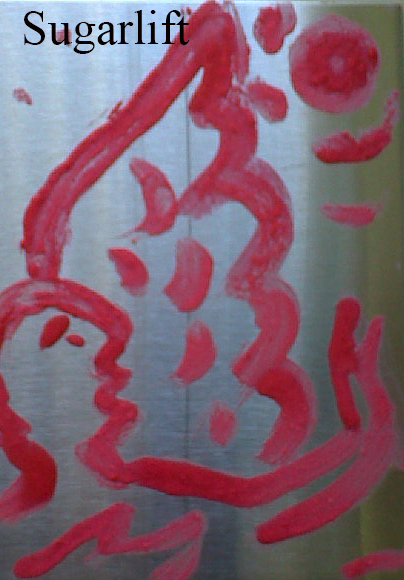 Three-Dimensional Printing: a process for making a physical object from a three-dimensional digital model, typically by laying down (printing) many successive thin layers of a material. It brings a digital three-dimensional object (its CAD representation) into its physical form by adding material layer by layer

Woodcut: A relief process like linocut in which a design is cut into the plank (side grain) of a flat piece of wood, using a knife or gouge.  Although flat areas of colour are possible, interesting printed textures from the grain of the wood may be exploited and are a characteristic feature of the process.  Woodcuts are printed in the same way as linocuts. 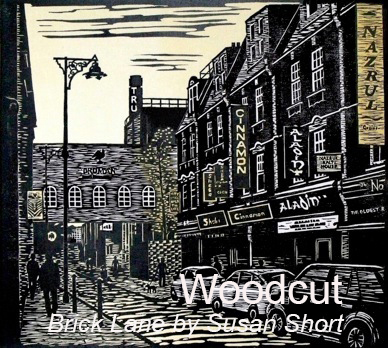 Wood engraving: A relief print but on an end-grain block, usually boxwood, rather than on the plank. Cut with similar tools to those used for engraving on metal, it requires much skill and planning, but the clean-edged cuts allow for very fine detail. 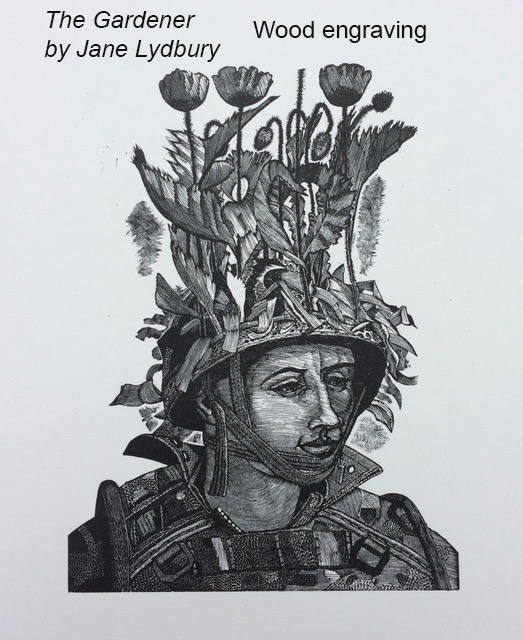