We were warmly welcomed by the artist who generously shared many technical tips and unusual insights about what it means to be an artist and a mother. The relationship between those two roles is rarely shown and celebrated with more life-embracing, love-affirming visuals than in the works of Anita Klein. The experience of motherhood, womanhood and now grand-motherhood has been, since the beginning, at the very heart of her art. It informs and colours her prints and paintings in the best possible way. Had she not spent time cooking with her daughters, travelling as a family or taking a newborn in her arms, she might not have imbued the related works with such intimacy and truthfulness. The woman in her paintings and prints is any and every woman. Through her, Anita celebrates the universal in the particular and this is what makes her work so popular and at the same time strongly and unashamedly personal! 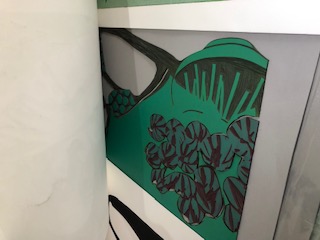 Her honesty and bravery in being herself, carving her place into the art world as both a woman and a mother, is truly inspiring. But her self-deprecating humour and her no nonsense approach really won over our hearts ! “My children were my inspiration,” she says, “so they actually paid for their own upbringing!”

She was trained at Slade and puts most of the work in the drawing . She admits to working at it over long periods and until she gets it absolutely right. The effortlessness of her style is the product of ‘proper effort’, she assures. She uses her sketchbook constantly for recording ideas and for inspiration for new works. 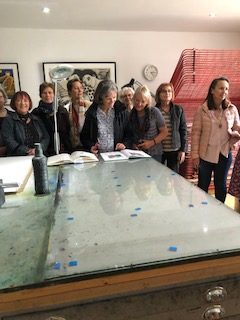 She also keeps a large and very precise editioning book with pictures; in there every print is recorded from pulling to selling.

She says she never plans anything before a painting but tries to remain open and loose as she progresses – never throwing anything away or making judgements until the end. Her prints, though, are carefully planned, registered and pulled on thick Somerset paper. She carves then cuts up the soft lino for ease of inking and every one of them is planned and inked from black through to each coloured layer. She usually finishes off with a very transparent extended white! A rather counter-intuitive approach.

She believes in trusting one’s own style and originality:
”The least time you spend looking at other people’s work or trying to be someone else, the better.”
Not a bad example to follow considering that Anita Klein was serving for 3 years as the first female and youngest ever president of the Royal Society of printers and engravers. 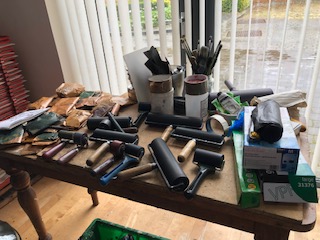 A visit and an encounter to remember! Thank you Anita and Jacki.