Janet French and Emma Buckmaster are printmakers who have been working together for the last ten years. 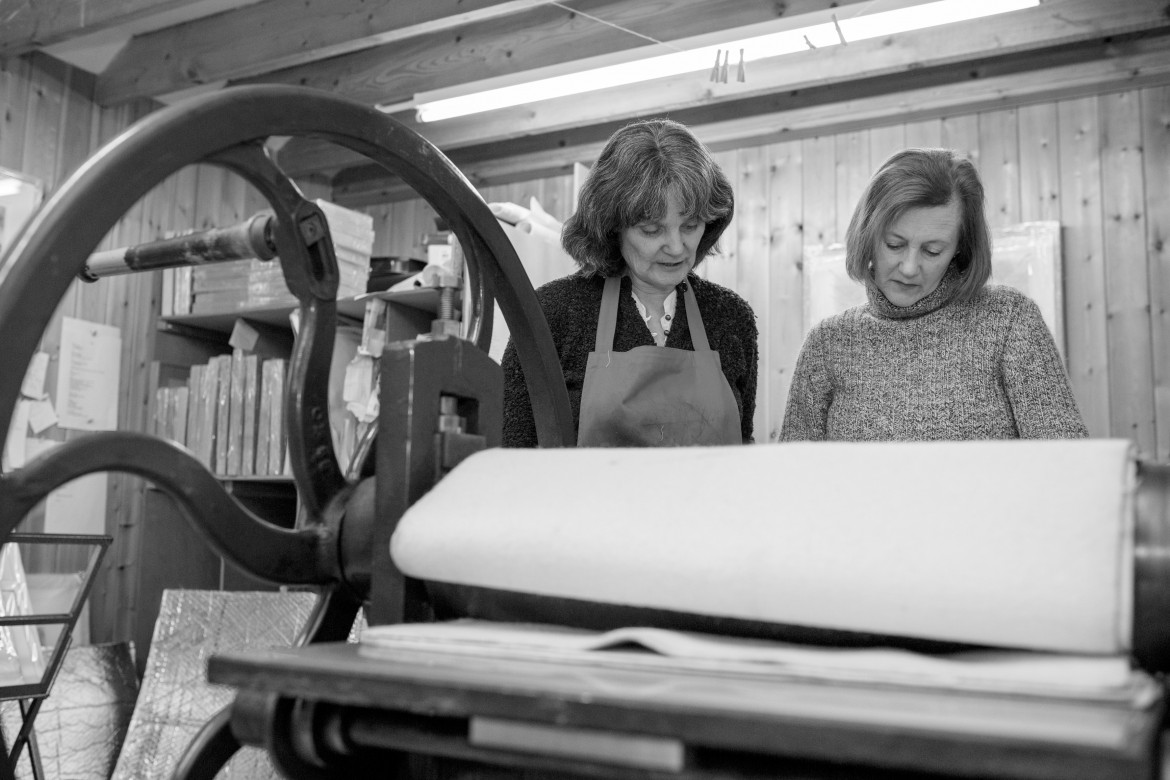 They initially met at Gainsborough’s House Print Workshop, an open access printmaking studio in Suffolk . The workshop provides a forum for artists to meet and help each other and in their case gave them an opportunity to try working on a very unusual printmaking project.

They had both been testing the boundaries of printmaking in their respective colleges and found common ground in the desire to challenge printmaking convention. With a shared interest in plants and natural materials and a particular love of trees, it wasn’t long before they decided to combine their separate skills and try printing Emma’s etching plate onto Janet’s leaf paper. Whilst the first attempts were discouraging they persisted and gradually began to achieve exciting results. 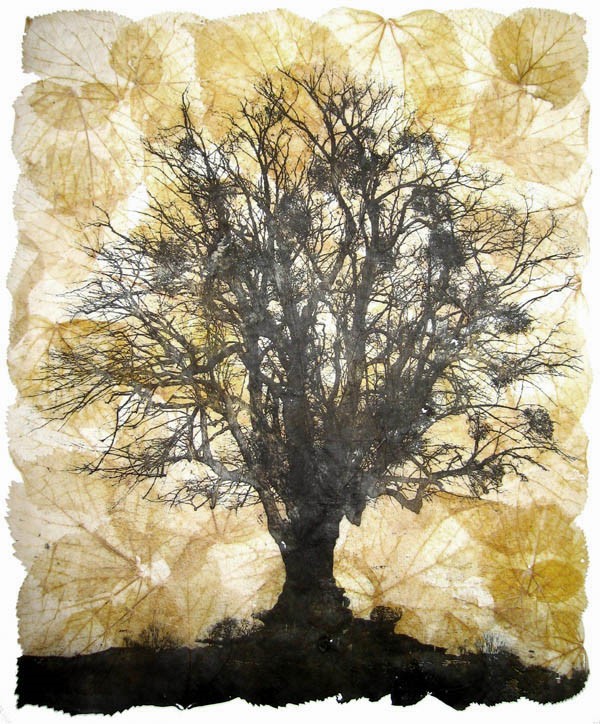 As they continued to experiment they had to find a way to work in collaboration for the longer term. It was important for them to have an equal input into the work so that they could share equally in any success or failure. Luckily the division has worked quite naturally with each of them being able to specialise in what they are best at. The design work is done together and passed backwards and forwards between them until they are both happy. It is often not until the work is completed and framed that they can be sure that they have created the result that they were looking for. The combination of the intricate leaf paper and the detailed tree portrait has to achieve the right balance between strength and delicacy. The tree must be botanically correct and recognisable but must not obscure the leaf paper itself, which is an integral part of the image. The framing is also designed to show the paper to the best advantage and the prints are captured between two sheets of glass in oak box frames. This allows some light to filter through the paper and for the print to throw a shadow of the leaf shape onto the backing board.

They have now been working together for over ten years and have created a series of etchings of native tree species printed on to paper made from the trees’ own leaves. Each year they add further trees to the collection. It is a continuous process of experimentation and learning. Each new tree requires at least a year of tests and trials to make the leaf paper and the etching plate. Some tree types such as Holly – ‘Ilex Aquifolium’, which took four years to develop, are particularly challenging. For each new print the leaves must be collected in the autumn and tested before making paper the following year. At the same time a new image must be designed and worked on. Much of this can be done together before the plate is etched and proofed. 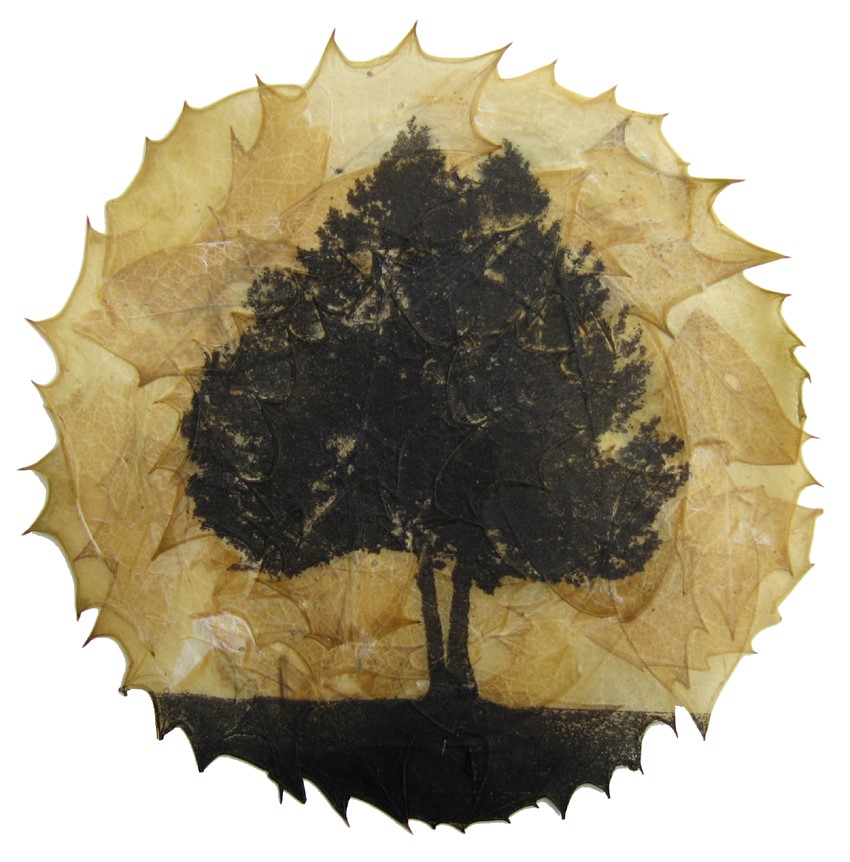 Working as a collaboration has other advantages such as being able to share the delivery and collection of work to exhibitions, attending private views and exhibitions together, sharing out the paper work and all the record keeping that editioning prints requires. They also collect leaves together and go on expeditions in search of new trees.

The images are all portraits of actual trees. Initially they were from East Anglia but the series now includes trees from further afield. A recent addition to the series is a wonderful Copper Beech from Wiltshire which will be shown at this year’s Royal Academy Summer Exhibition and their first overseas tree is an ancient olive tree in Andalucia, Spain. 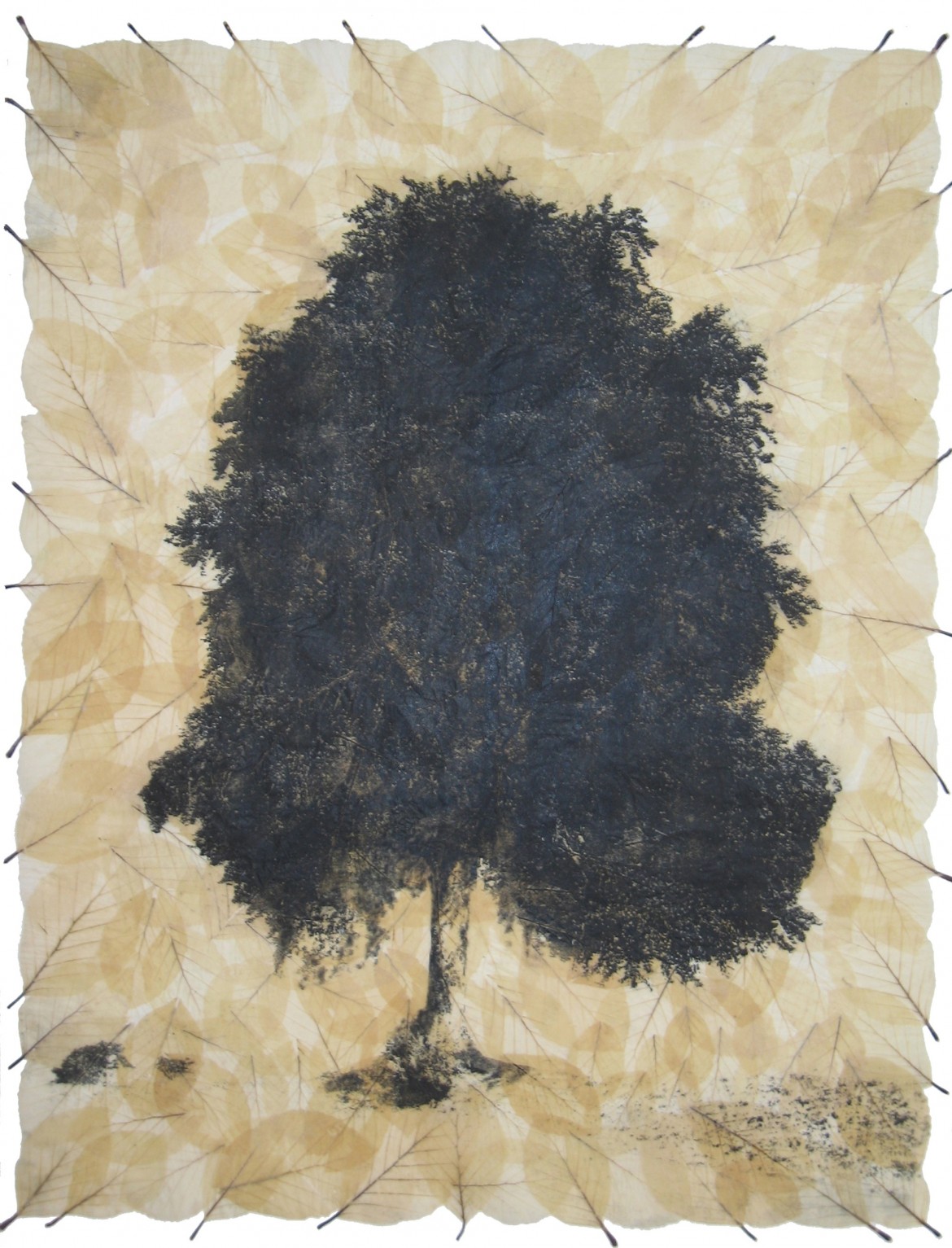 At the moment trees remain the main challenge and source of inspiration but they plan to explore the potential of other types of plants in future. Urtica Dioica – stinging nettle was a recent success and may form the start of a new series.