This wonderful venue proved to be a most unique, historic and fascinating place to visit.

We were welcomed with plenty of tea and coffee in the lovely St Bride Library, which was a great start!

Members were introduced to some of the great treasures of the St Bride Foundation with a talk by Mick Clayton (Manager of talks and tours).

We were shown some amazing, most awesome pieces of printing history, throughout the ages to the present day, including an incredible first example of printed material on papyrus, one of which, originating from Luxor, makes up the oldest object in the collection.  According to the British Museum, it is one of only seven being inscribed on both sides. 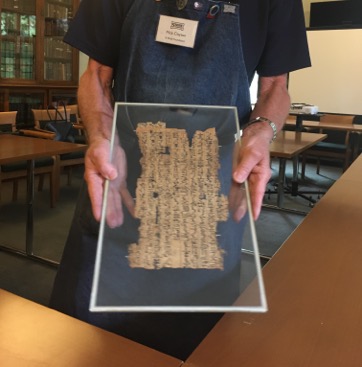 Mick Clayton, Steven Lineham and Barry Felsted were all former compositors, working for mainstream newspapers.   They had great stories to tell about their time working in the printing industry.  We were all quite spellbound, seeing beautifully carved examples of type, molded from hot metal into a special hand-made small press.   Some of these individual letters were so tiny, we were told they must have been carved by children.  We were able to handle examples of a few lines of lead type, plus individual metal letters in different sizes and fonts.  (and yes, we were advised in a nice way to wash our hands afterwards)!

We were shown examples of different typesetting, the role of compositors, monotype and linotype machines and methods of working with wood engraving.  We were also told about the revolution in printing enabled by The Gothenburg Press in 15c and William Caxton who was thought to bring printing presses to England and printed the first edition of Chaucer’s Canterbury Tales in 1477.

The workshop area was a treasure trove of early methods of printing – a variety of lovely old printing presses and even a special large keyboard that involved typing in the news, without seeing the words coming out – as the method involved typing to create indentations in the form of dots on a roll of paper.

We were shown examples of the original designs of lettering for road signs. Mick related how the librarian of the SBF requested examples of the original typeface designs on card, as these were abandoned in the designer’s loft. Jock Kinneir and Margaret Calvert OBE designed a ‘Transport font’ used on road signs and the Rail Alphabet font used on the British railway system, plus an early version of the signs used in airports.

We were given presentation on Linotype and Monotype. Members were later treated to a printmaking workshop.

After the tour and talk, many members expressed how very much they had enjoyed the visit and that they felt the talk was most informative with its vast historical printing content. This was further enhanced by the personal recollections and stories told – which brought to life the world of industrial printmaking as it used to be. The members who talked to us afterwards, expressed that it was a most enjoyable, fascinating, remarkable and memorable experience.